Car accidents and the types of head injuries they can cause 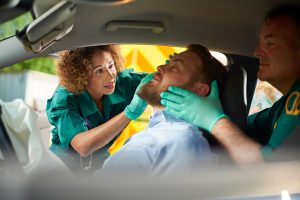 The brain is a delicate organ that holds complete control over our bodies. Due to its "plasticity", the brain can change how it looks, grows, thinks and responds over years and in direct response to events like trauma. A head injury can be devastating, leaving lasting effects on the brain that can alter someone's quality of life permanently. Traumatic brain injuries, commonly referred to as TBI, can occur under many different circumstances, including car accidents.

According to the Centers for Disease Control and Prevention, TBIs are a major cause of death and disability within the United States. In fact, they recently accounted for about 30% of all injury deaths. Motor vehicle accidents were the third-leading cause of TBIs and hospitalizations.

Arguably the best-known type of brain injury, a concussion is most common in people under 40 and is normally caused by a blow to the head, or bodily impact that causes the head to jerk with substantial force such as whiplash. The result is the brain bouncing around within the skull, which may damage its cells and cause a loss of consciousness. Categorized as a mild traumatic brain injury (mTBI), a concussion involves the cushion of fluid that protects the brain (called cerebrospinal fluid) hitting the bone of the skull. This causes the messages transmitted along the axon (what connects neurons in the brain) to become disrupted.

Concussions are common, unfortunate injuries that mostly occur in the realm of sports, slip-and-fall accidents, and auto accidents. Heads hitting steering wheels or dashboards, seatbelts locking and rolling cars are all sudden and harsh movements that can easily cause the brain to collide with the skull. Symptoms include:

Severe concussions can need intense rehabilitation. They may result in amnesia, coma or even seizures. They can also result in contusions. A contusion is a bruise, which is defined as an area of injured tissue where the blood capillaries have been broken, usually by force or impact. A blow to the head, especially one related to a concussion, can leave a small contusion on the brain, known as a cerebral contusion or intracerebral hematoma. Larger ones may require surgical intervention.

Auto accidents can involve vehicles traveling at high speeds, making the trauma from that impact (and the risk of a concussion) even greater. Because of the range of severity in these injuries, concussions typically can take weeks to months to heal, and work or school is often missed as a direct result. Concussions require a visit to the emergency room, and imaging or other tests may be needed, meaning medical bills can mount quickly. A car accident can seem like a quick event, but it can affect a victim's life with long-term consequences, including permanent disability.

In a car accident, closed TBI's aren't the only type of brain injury to cause severe trauma. Open brain injuries are devastating. These occur when an object fractures the skull and damages the tissue within. Skull fractures can come in many forms, from a simple linear skull fracture to depressed and diastatic fractures, and each can be caused by a unique event:

Events such as coming into contact with a windshield or another part of a motor vehicle can easily damage the brain so badly that a motor vehicle accident victim may even suffer meningitis, which is a deadly infection of the brain easily contracted if brain tissue is left exposed. Other complications include:

Vehicles, especially those driven at high speeds and by distracted or drunk drivers, can easily cause heavy trauma upon impact.

A serious head injury is not always obvious

It is of utmost importance to keep a careful eye out after a car accident. Head injuries, especially concussions, do not always make themselves known at the scene. A simple headache or feeling of nausea can indicate a concussion or other traumatic brain injury. And those injuries can have underlying, undetected dangers such as swelling on the brain.

After a car accident, there are two things you should do. Firstly, seeking medical attention (even if you feel fine) immediately after the accident is a must. A thorough medical examination can rule out dangerous conditions, and treat whatever injuries have been sustained. As for the negligent driver serving as the cause of the accident, you need a reliable and experienced attorney on your side. Given the dramatic circumstances and consequences of traumatic brain injuries, the sooner you take action, the easier it will be to seek compensation for your long-term costs.

At the Law Offices of Mark E. Salomone and Morelli, our job is to get victims the compensation they deserve, and our opponents know we do it well. We make it our policy to pursue every avenue possible to build strong cases and seek justice on behalf of seriously injured clients.