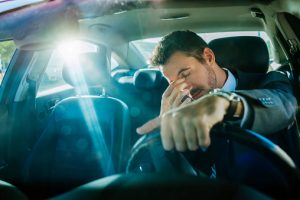 Drivers who don't get enough sleep can be just as dangerous as drunk drivers in many situations, according to a recent study. And even sleeping 1 to 2 hours less at night can significantly increase the odds of a driver causing a serious car accident.

But many people might not realize just how dangerous drowsy drivers can be on the road in Hartford or elsewhere in Connecticut. That's because many people have driven when they're tired and such accidents often seem like victimless crimes.

The reality is drivers have a choice. Instead of falling asleep at the wheel, drivers can choose to pull over and not drive when they're too tired. Instead, these drivers knowingly put everyone's safety at risk and end up causing serious accidents.

The less drivers sleep, the more dangerous they become

The AAA Foundation  (formerly known as the American Automobile Association) conducted a study which examined the effects of less sleep on drivers. The findings were startling. In the December 2016 study titled "Acute Sleep Deprivation and Risk of Motor Vehicle Crash Involvement," researchers examined crash data involving 7,234 drivers involved in 4,571 accidents between July 2005 and December 2007.

"You cannot miss sleep and still expect to be able to safely function behind the wheel," said Dr. David Yang, executive director for the AAA Foundation for Traffic Safety. "Our new research shows that a driver who has slept for less than five hours has a crash risk comparable to someone driving drunk."

Drowsy drivers 'a problem' in Connecticut

Another recent study found that nearly 83.6 million people (39 percent of the nation's 214 million licensed drivers) drive while sleep deprived every single day, according to an August 2016 Connecticut Post article about a Governors Highway Safety Association study.

Each year, an estimated 6,000 people die nationwide in drowsy driving accidents, according to statistics compiled by the National Highway Traffic Safety Administration and cited in a February 2017 Reuters article.

In Connecticut, 2,440 accidents (including four fatal ones) were caused by tired drivers between January 2015 and July 2016, according to the Connecticut Department of Transportation as noted in the Connecticut Post article.

"It is a problem," Dr. Rock Ferrigno, chairman of Bridgeport Hospital's emergency department, said in the Connecticut Post article. "We do see patients who fall asleep while driving, or who drive while drowsy and get in accidents."

Time of day and other risk factors

Younger, tired drivers wreak havoc on the roads, often after midnight and before sunrise, according to data compiled by the National Highway Traffic Safety Administration. In particular, several studies cited by the NHTSA noted the following population groups cause the most drowsy driving accidents:

In addition, the NHTSA study noted the peak times for accidents caused by tired drivers by age group:

How to spot tired drivers

The warning signs that another driver might not be fully awake can sometimes be hard to identify. But if you look carefully, you may be able to spot tired drivers and avoid a serious motor vehicle accident.

Tired drivers can be especially common at night on major highways like I-95, I-84 or I-91 in Connecticut, where tractor-trailers and other commercial drivers often travel long distances on cross-country journeys. Warning signs include:

But even if you suspect that another driver has fallen asleep at the wheel, that doesn't mean you can avoid them crashing into you. That's why it's important to know what to do if you've been involved in an accident caused by a tired driver.

What you should do after your accident