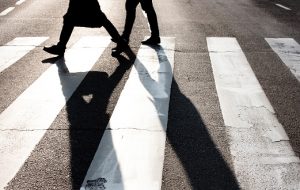 Police are investigating a Boston pedestrian accident where four people were hospitalized - including an 8-year-old girl and a 61-year-old woman who police say were struck by a vehicle on the sidewalk.

Boston accident attorneys know that according to the National Highway Traffic Safety Association's 2012 report, there were 58 pedestrian fatalities in the Massachusetts that year, accounting for more than 18 percent of the total traffic deaths. This was far higher than the national average of 13 percent.

Pedestrian fatalities cause for concern in Boston

Urban areas like Boston are far more likely to see the majority of these incidents. A 2012 report by the National Alliance for Biking and Walking found that Boston had an annual average of 8.3 pedestrians killed annually, accounting for nearly 35 percent of all its traffic fatalities - more than one-third.

This is in spite of the fact that pedestrians only account for 5 percent of the people heading to work and 13 percent of travelers overall.

Of course, some urban areas fared worse - in New York, pedestrian deaths amounted to 54 percent of the total, in San Francisco 49 percent, in Honolulu 45 percent. Still, it's high enough that further attention on this issue is warranted - particularly when we have 8-year-olds who are paying the price.

According to news reports of the most recent incident, police are reporting that the driver of a Toyota was driving in the right lane on Tremont Street when he reportedly ran a red light, striking a Nissan that was stopped at the intersection. The Nissan was thrust into the intersection, slammed into a traffic light and then spun around onto the sidewalk, striking the woman and young girl.

Witnesses feared the two may not survive, as neither one moved at all at first. However, both were transported to the Boston Medical Center, where it's said that despite head injuries and lacerations, they are expected to live.

Of course, we don't know what their future will be in coping with the injuries they sustained. Someone who suffers a head injury may have incurred disabling and/or permanent damage.

Despite an overall decrease in traffic deaths, the NHTSA reports pedestrian deaths are one type of crash that is increasing, climbing four percent from 2009 to 2010.

Nearly 80 percent of pedestrian fatalities occur at areas that are not intersections, and about 70 percent happened at night.

The good news is that Massachusetts state officials have begun to prioritize prevention of pedestrian crashes, with 5 percent of the state transportation budget dedicating to projects that underscore pedestrian and bicyclist safety. That's compared to about 0.5 percent of state transportation budgets dedicated for the same purpose by states like Florida and Louisiana, which also have a major pedestrian fatality problem.

While pedestrians can't be responsible for reckless drivers, they can determine to walk defensively. The NHTSA recommends the following: