18 Locations
Home • Blog • Car vs. Pedestrian in Massachusetts: Who Owes the Greater Duty of Care?

Car vs. Pedestrian in Massachusetts: Who Owes the Greater Duty of Care? 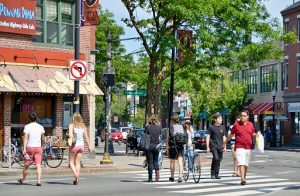 Pedestrians are perhaps the most vulnerable road users in Boston. Typically, nothing shields them from the impact of a moving vehicle. These could be commuters, walkers, hikers, runners or anyone traveling by foot, wheelchair or stroller.

The National Highway Traffic Safety Administration (NHTSA) reports there were 4,750 pedestrians killed and another 76,000 injured nationally in 2012. That was a 6 percent increase from the previous year. In Massachusetts, there were 72 pedestrian fatalities that year, which was an alarming 20 percent of the total. In Boston, 22 percent of those killed in traffic crashes were pedestrians.

A significant number of these incidents are precipitated by drivers who are careless, reckless, distracted or impaired. Drivers of motor vehicles owe a duty of care to other road users. This includes pedestrians.

Duty of care means drivers have a responsibility to act (or refrain from acting) in the way a reasonable person would in a similar situation to protect other people from foreseeable harm. Failure to do so could be considered negligence, and it may be grounds to pursue a lawsuit if it results in serious injury.

Part of acting in a reasonable way involves obeying all traffic laws.

Mass. Gen. Law Part I, Title XIV, Chapter 89, Section 11 deals with duties pertaining to marked crosswalks and yielding the right-of-way to pedestrians. The law states, in part, that when traffic controls aren't in place or operational, drivers must yield the right of way (slow down or stop) to a pedestrian crossing the road in a marked crosswalk.

But this is not to say pedestrians don't also owe a duty of care. In fact, as users of the road, they must abide by traffic safety laws and act reasonably to prevent foreseeable danger - including risk to themselves.

Mass. Gen. Law Part 1, Title XIV, Chapter 90, Section 18A holds that pedestrians must yield the right-of-way to all vehicles when crossing anywhere other than a marked crosswalk. Failure to do this is known as "jaywalking." The fact the fine for this offense is just $1 for the first four offenses and $2 for each subsequent offense may not serve as much of a deterrent. (Other cities, such as Los Angeles, fine as much as $200 per offense.) Pedestrians who disobey this law should know they do so at their own risk. Their ability to recover for damages in the event of an injury may be significantly reduced or eliminated.

Massachusetts adheres to a modified comparative fault model with a 51 percent bar when it comes to plaintiff fault. In other words, if the injured person is more than 51 percent at fault for his or her injury, he or she will be ineligible to collect damages. A pedestrian who is injured crossing outside of a marked crosswalk may find it difficult to overcome the modified comparative fault bar.

Of course, every case is different, and there may be legal circumstances in your case that provide a path to recovery. Another reason why it's imperative for all injury victims to seek out the counsel of an experienced Boston injury lawyer.