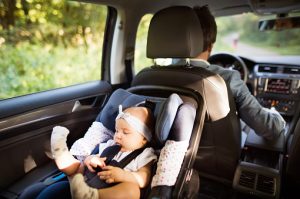 Parents put kids in car seats and do everything they can to protect them from accidents, but some parents may be putting their children at risk of serious injury or death inside of vehicles. This risk comes from heat stroke. On a day when the temperature outside is in the 80's, the temperature inside of a car could reach a deadly level in as little as 10 minutes, even if the windows of the vehicle are left open by two inches.

If a caregiver puts a child at risk and injury, or a death occurs, a personal injury attorney should be consulted by the child's family. Parents and other caregivers need to understand the dangers associated with hot cars and avoid putting kids into a situation where they could suffer permanent brain damage or lose their loves.

The Risk of Heat Stroke

The National Highway Traffic Safety Administration (NHTSA) has a public service campaign aimed at alerting parents of the risks of heat stroke and preventing child deaths when kids are left inside of parent's vehicles. The program is called Look Before You Lock and it runs through September.

The goal of the public service program is to encourage parents to get into the habit of looking in the front and back seats of their vehicle before locking the doors. That way, the parents could see if they have forgotten their child in a car seat in back. This types of incidents occur when parents do not remember that they are taking their child to daycare or have forgotten they put their kids in the car.

Each year since 1998, an average of 38 kids have died annually because they were left inside of vehicles on hot days. In 2013, there were 44 fatalities and the NHTSA indicated that this above-average number could be a sign of a disturbing trend.

Some of these kids were victims of accidental negligence when their parents forgot that they were taking their children to daycare and went into work, while other kids may have been left on the back of daycare buses or vans.

Young kids are most vulnerable to being killed in a hot car because they are not able to regulate their body temperature. A young child's body heats up anywhere from three to five times faster than an adult's body. Yet, parents with kids under the age of three were significantly more likely to leave their kids in the car. A total of 23 percent of parents with children three and other said they had left their child in the vehicle.

Parents need to know how dangerous this is and avoid leaving their children in the car to prevent heat stroke injuries.

Boston accident victims may contact the Law Offices of Mark E. Salomone at 1-800-WIN-WIN-1 or can visit https://www.marksalomone.com.