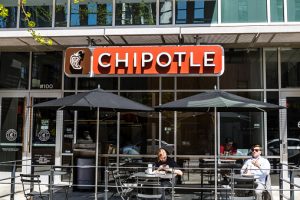 In Boston, diners at several Chipotle Mexican Grill restaurants fell ill after eating food served to them at the fast food chain. The serious incident raises questions about food safety and the potential liability of the business owner.

The Chipotle illness outbreak started with diners in several Western states in late October 2015. They suffered from the effects of E. coli, landing some of them in the hospital with illness that sometimes lasted for weeks.

In December, scores of Boston diners in the Brighton/Cleveland Circle Chipotle Mexican Grill contracted a norovirus. Norovirus is usually less serious than E. coli, but it is still a virus that affects the gastrointestinal tract and creates great discomfort and could cause dehydration.

After at least 140 students became ill after eating at a single Chipotle restaurant in Brighton, the eatery closed and is undergoing a deep scrubbing. Boston College Athletic Department issued a dire warning to athletes directing them not to eat at Chipotle until further notice. In Boston additional people became ill after being in contact with the stricken Chipotle diners. Observers have commented that this norovirus outbreak is unusual in the large number of people who have been sickened. It is also unusual because most food borne illness is related to other bacteria such as E. coli or salmonella.

Food safety is serious business. According to the U.S. Centers for Disease Control and Prevention, norovirus is sometimes overlooked because it is less likely to kill you than disease-causing forms of E. coli or salmonella. However, it is by far the most common source of foodborne illness. As stated by CDC Director Tom Frieden, M.D., M.P.H., "Norovirus outbreaks from contaminated food in restaurants are far too common." All who prepare food, especially the food service industry, can do more to create a work environment that promotes food safety and ensures that workers adhere to food safety laws and regulations that are already in place."

How did the Boston-area Chipotle Outbreak Occur?

What happened at the Brighton Chipotle? One report indicates that a worker was sick while at work. Another states inspectors found the chicken and steak on the service line was heated only to 120-124 degrees, which are temperatures too low to inhibit bacteria growth. An infected worker may have touched food that is served without cooking, such as lettuce, grated cheese or guacamole.

Given what we know so far, could Chipotle be liable negligence or for breach of warranty?  Under Massachusetts law, did Chipotle breach any duty to the paying customers who got sick from eating the food at the restaurant? If a duty was breached, and someone has measureable harm, actual damages may be paid to them if the harmed person prevails in a lawsuit.

Under Massachusetts law, if someone starts a business or a service and invites the public to use that service for a fee, the business owner owes a duty of reasonable care to the customer. Under this theory of standard negligence, a restaurant owner might be found negligent should they fail to provide safe food to a customer.  If food causes illness in a wide swath of customers, a court may find that the business owner used less than reasonable care toward the customers when the unsafe food was served. That restaurant owner could be found to be negligent and might owe damages to the person who ate the tainted food and got sick.

Other Entities May Be Responsible for Causing Diners to Get Sick

In addition to the Chipotle principals, there may be other responsible parties who did not provide a reasonable duty of care prior to the food being in the heating pans at the restaurant.  When food borne illness is about, the food sources must also be inspected for problems.  Farms, dairies, delivery services and food providers must also be scrutinized for fault.

Food service is a highly regulated industry. Many guidelines and rules for safe food handling exist on the local, state and federal level.  Should someone suffer significant damages as a result of tainted food served at a restaurant, it might not be too difficult to prove the reasonable duty of care was clearly outlined yet unfortunately, or even brazenly, breached.

In addition to standard negligence, in Massachusetts a second theory might be available to a harmed party to recover losses. When food poisoning is at issue, a food purveyor might also be found in breach of warranty if the food is determined to be defective. Massachusetts General Law chap. 106 Section 2-314 provides, "a warranty that the goods shall be merchantable is implied in a contract for their sale if the seller is a merchant with respect to goods of that kind. Under this section the serving for value of food or drink to be consumed either on the premises or elsewhere is a sale." So, when someone who is in the business of selling food sells something that is unsafe for consumption, he could be liable for damages to someone who ate the food and was harmed because of the implied warranty of safety that goes with serving food at a food establishment.

In Massachusetts if you are in the business of selling food, you are mandated to sell "merchantable," that is, not defective, food.  A harmed party might argue that the fact that the food caused sickness meant that it was not "merchantable" and therefore a cause of action to claim that damages exist.

In Massachusetts, when a person is harmed as a result of another person's negligence, the harmed person may sue to recover any losses they suffered as a result of the negligence. Sometimes tainted food can lead to serious health problems, loss of work and intense pain and suffering.  Should this happen, it is important to consult with an attorney to determine if you have a claim against the business that sold you the food that made you sick.  Hopefully someone who suffers food poisoning makes a full physical recovery. A good attorney can help you make a full financial recovery.  Call the Law Offices of Mark E. Salomone today at 800-WIN-WIN-1 for a free consultation.