18 Locations
Home • Blog • How Safe Are Trampoline Parks? What You Need to Know

How Safe Are Trampoline Parks? What You Need to Know 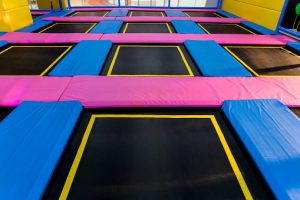 Trampoline parks have been popping up in Massachusetts and all over the United States. In fact, they have jumped significantly from 40 nationwide facilities in 2011 to more than 800 today. These wide-open facilities are a free range for children and families to run, jump, and bounce. Does this sound like fun? Most likely it does, but trampoline parks have also proven to be dangerous for patrons.

What's worse, these facilities currently operate without any federal oversight. CBS reporter Meg Oliver looked deeper into the dangers of trampoline parks after a new law in Utah set forth strict safety regulations. In that state, trampoline parks are required to carry specialized insurance policies and undergo annual safety inspections.

The rate of injuries at trampoline parks has gotten so bad, that attorneys all over the US have called on Don McPherson, a former elite gymnastics coach, to testify on behalf of the victims in over 200 cases.

According to McPherson, the design of trampolines may be the culprit behind these catastrophic injuries. The standard trampoline design is composed of thin padding laying over steel cables and connected by chain links. When someone lands on the thin padding, they send waves of energy in multiple directions. In many cases, this causes "double bouncing."

"They're moving at speeds and with energy that when they hit or get hit by somebody else that's twice their weight, they end up with crush injuries," McPherson said.

Lawmakers are cracking down on trampoline parks, including legislation sponsored by Sen. Richard Blumenthal (D-CT) that would hold these facilities accountable for any injuries sustained by visitors.

"Trampoline parks want to avoid justice," said Blumenthal. "They want to rig the system against anyone who is injured who may assert claims against them."

In many cases, patrons are convinced to waive their rights to a court case by signing an arbitration agreement. Trampoline parks tend to push arbitration in order to hide any injuries or deaths that could hurt business.

A new bill called the Fair Act would eliminate arbitration agreements, not just at trampoline parks, but for all consumer cases.

Injured at a trampoline park? Seek legal representation before making any other decisions.

At least six deaths have reportedly occurred at trampoline parks across the United States within the last seven years. Due to arbitration clauses, those numbers could be higher. In addition, serious injuries, such as broken necks, broken ankles, knee injuries, bone fractures, broken backs, head injuries and paralysis have been reported.

A fun family outing should not have to end in tragedy. If you or a loved one sustained an injury at a trampoline park, it's critical that you speak to an experienced Massachusetts personal injury attorney before making any other decisions, especially if you are asked to sign an arbitration agreement.

The legal team at the Law Offices of Mark E. Salomone will work tirelessly on your behalf to hold negligent facilities accountable. We'll launch a thorough investigation into the facility and look for evidence of poor design and lack of staffing.

Contact our law office to schedule a free case evaluation.