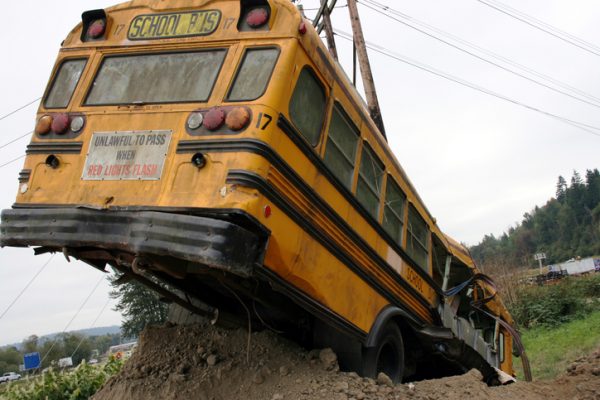 School buses are used to transport more than 25 million students each day across the United States. They are considered the safest way for children to get to school and extracurricular activities. Did you know that impaired driving is a safety concern for school bus drivers? It is, according to a recent study conducted by Stateline - a nonprofit organization that provides reporting and analysis on trends in state policy.

In September of 2019, an incident involving a drunk school bus driver in Washington State made national headlines. A shocking video released by NBC News shows the driver behaving erratically with a bus full of children and shouting, "I am crazy. I am totally crazy."

The driver reportedly ran three red lights and exited the roadway. A student on the bus called 911 as soon as he arrived home. Police later arrested her and found that she had a blood alcohol concentration (BAC) of 0.096 percent. She faced charges of DUI and reckless endangerment

Do bus drivers get behind the wheel while impaired?

Massachusetts is among the 38 states where impaired school bus drivers have endangered children.

In response to the study, the National Safety Council (NSC) and Advocates for Highway and Auto Safety (AHAS) are calling on state and federal government officials to be proactive at preventing bus drivers from getting behind the wheel while impaired by alcohol or drugs. School bus drivers are prohibited from driving with a BAC greater than 0.04 percent. This BAC threshold set forth by the Federal Motor Carrier Safety Administration may not be enough to mitigate impaired driving.

The NSC and AHAS are both calling for stricter oversight over school bus drivers, including:

What should I do if my child was injured by an impaired school bus driver?

Massachusetts parents place trust in school bus drivers each day. When those responsible for transporting our children to and from school behave erratically, they should be held accountable.

If your child sustained an injury in a school bus crash, the attorneys at the Law Offices of Mark E. Salomone can help you pursue justice. We serve clients across the state of Massachusetts. Contact us online to schedule your free case evaluation or simply call 1-800-WIN-WIN-1.