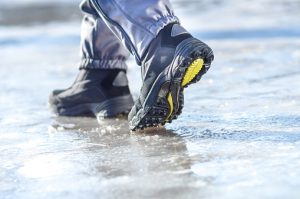 While it may seem instinctual to "hibernate" during these colder months, property owners in this snowy New England state need to make sure they are aware of the conditions occurring outside their window.

In the full swing of the winter season, property owners in Massachusetts are urged to be especially diligent in clearing accumulations of ice and snow from walkways, parking lots and entrances.

This is especially important in light of a 2010 Massachusetts Supreme Judicial Court decision that abolished the century-old distinction between natural and unnatural accumulations of ice and snow. Essentially, regardless of how the build-up occurred, both public and private property owners owe an inherent duty to keep their premises reasonably safe for lawful guests.

In Papadopoulos v. Target Corp., plaintiff sustained injury after slipping and falling on a patch of ice in the parking lot in front of a department store. He filed a personal injury lawsuit against the store, which controlled the area of the lot where he fell, as well as the landscaping contractor hired to remove snow and ice from the parking lot.

The ice on which the elderly, handicapped plaintiff slipped was from a patch of refrozen runoff from the snow pile, which meant it would have been a "natural" accumulation under old law for which the property would not have been accountable.

A trial court judge granted defendants' motion for summary judgment as a matter of law on grounds the accumulation of ice and snow had been due to natural causes, and thus defendants were absolved of liability.

Attorneys at The Law Offices of Mark E. Salomone know the original decision that set this precedent was handed down in 1883 in the case of Woods v. Naumakeag Steam Cotton Co., and the court had adhered to this standard ever since - until 2010.

The appeals court affirmed the trial judge is ruling in Papadopoulos. Plaintiff then brought his argument before the state high court, which directed involved parties to answer whether, in a premises liability claim involving ice-and-snow-related slip-and-falls, there should continue to be a distinction as to whether the accumulation in question was natural or unnatural.

Ultimately, the court determined no distinction should exist when it comes to liability because all property owners have an obligation to lawful visitors to use reasonable care in shielding against known or knowable dangers.

The case was then remanded to Superior Court for trial.

That finding put Massachusetts in line with most other states on the issue of liability for snow-related slip-and-fall claims. In legal circles, it's sometimes referred to as the "Connecticut Rule." Hailed as a "great decision in the interest of public safety," the ruling was applied retroactively to all civil claims pending at the time.

Owners of property need to be extra vigilant of snow and ice accumulations, particularly in the wake of a winter storm. Clearing walkways and other public areas early and often can help stave off potential falls - and claims of liability.

Those who suffer injuries as a result of negligence in clearing these accumulations can recover for medical bills, pain and suffering and lost wages. For businesses, these claims would likely be paid through commercial liability insurance. Falls at residential locations will most likely be covered by private homeowner insurance.

Contact the Boston injury lawyers at the Law Offices of Mark E. Salomone at 1-800-WIN-WIN-1.