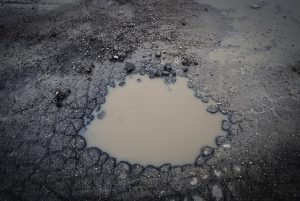 We see potholes frequently when we drive. They are scattered around our cities, on roads of all kinds, from small bits of missing pavement to large holes we have to swerve to avoid completely. We may complain about them or joke about them, and spend our summers trying to avoid congestion caused by road crews patching them up. But they're such a part of our daily lives that we almost forget how much of a danger they really are.

According to The Pothole, both Boston and Springfield were listed in the twenty cities with the worst roads. The list ranked cities with a population of at least 500,000 according to the percentage of roads that were ranked "poor," and a surprising number of entries were in the southwest or California. Boston and Springfield each made a showing with 39 percent, however, and Hartford was close behind at 38 percent.

There are so many potholes in the area that MassDOT has created a website that tracks known potholes on state-owned roads so drivers can see their progress on repairing them. As of the middle of March, the state has repaired 6,712 potholes already just this year, heavily clustered around northern Boston and the length of the Mass Pike. Those repairs have cost the state over $800,000.

Potholes are more than just nuisances on our roads. The Pothole claims that a third of annual fatalities on the road are related to poor road conditions. In 2013, only 31 percent of roads in America were rated "good," and as infrastructure continues to age and roads become more congested the impacts of poor road conditions are expected to increase.

While it is the responsibility of state and local municipalities to clear up potholes, drivers should keep their eyes on the road and approach such conditions with caution. It's always best to reduce your speed and drive around a pothole. Be careful not to swerve into oncoming traffic, as this can result in a catastrophic head-on collision. Avoid hitting your brakes abruptly, as this can result in a rear-end crash.

Some drivers may use poor judgement when approaching potholes. Excessive speeding, sudden swerving and abrupt braking are negligent acts that could result in a devastating crash.

If you have been injured in an auto accident caused by someone else's negligence during poor road conditions, contact an experienced attorney at the Law Offices of Mark E. Salomone.