18 Locations
Home • Blog • Is There Really a Difference Between “Buzzed Driving” and Driving Drunk?

Is There Really a Difference Between “Buzzed Driving” and Driving Drunk? 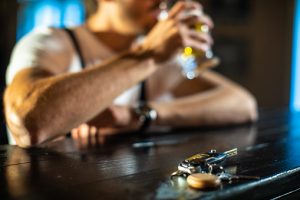 It's common knowledge that the legal blood-alcohol content (BAC) limit for drivers in Massachusetts and throughout the United States is .08. It's also common knowledge that drivers who exceed legal limits are at risk of getting arrested for drunk driving - or worse, causing serious accidents.

What many people might not realize, however, is that drivers who are below the legal limit also pose a danger to others.  A recent study by the University of California in San Diego indicates that the hazards of "buzzed" driving might be much greater than originally thought, and drivers who have consumed alcohol within legal limits face a higher risk of accident than sober drivers.

As an experienced drunk driving attorney in Boston knows, driving under the influence of any alcohol whatsoever can increase the risk of accident for drivers, even when that person's BAC level remains within legal limits.

In the first study of its kind, researchers from the University of California in San Diego analyzed car accident data from a national database of more than 570,000 collisions between 1994 and 2011 to determine the effects of alcohol on drivers within legal blood alcohol limits, according to Fox News.

The study used blood alcohol content measurements for drivers involved in each accident as well as clear indicators of blame for the accident, such as which driver ran a red light or drove in the wrong lane, to reach an eye-opening conclusion: there is simply no safe level of alcohol in the blood stream when it comes to driving.

Researchers said their findings indicate that so-called "buzzed" drivers (whose BAC is more than .00 and less than .08) faced accident risks dramatically higher than sober drivers. In fact, researchers found that drivers with a blood alcohol content level of just .01 percent - or roughly half of one 12-ounce beer - were 46 percent more likely to be solely blamed for an accident than a sober driver.

Is it time to lower legal blood alcohol content (BAC) limits in Massachusetts?

University of California researchers suggested that the United States follow the footsteps of several European countries in lowering legal blood alcohol content levels for drivers to .05 at minimum. In some countries, such as Sweden and Japan, BAC levels are even lower.

Even at blood alcohol content levels as low as .05, though, researchers warned that drivers still present an increased risk of accident. Currently, only commercial truck drivers and minors under the age of 21 are held to different standards than 21-year-old and older drivers of passenger vehicles (a .04 limit for truckers and .02 limit for minors).

No matter what a driver's blood alcohol content level might be, however, it's important for all drivers to realize that "buzzed" driving is impaired driving - and law enforcement officials have their eyes open for both "buzzed" and drunk drivers over the legal limit under the state's "Drive Sober or Get Pulled Over" campaign.

Furthermore, regardless of legal BAC limits, law enforcement officials in Massachusetts can pull over and apprehend drivers who show visible signs of impairment, even if their blood alcohol content level measures below the legal limit.

If you've been injured by a drunk driver in Boston, Worcester, Springfield or anywhere else in Massachusetts, a drunk driving accident lawyer in Boston can help. Contact the Law Offices of Mark E. Salomone today at 1-800-WIN-WIN-1.